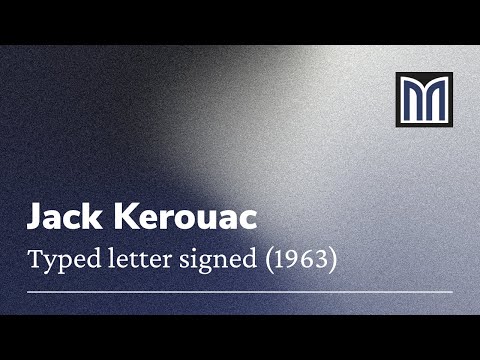 Dating from the final decade of Kerouac’s life, the present letter is an unpublished insight into how the writer’s relationships, attitudes and motivations developed in his later years.

On the back of the second leaf is a collection of abstracted forms to which he refers at the start of the letter. Kerouac ironically describes his artwork as a gift “worth 10,000 dollars within 5 years”. Identifying the piece, completed in pencil and marker, as an oil painting, he further comments on its value and rarity arising from the probability that he will “suddenly get bored with paint again”.

Subsequently, Kerouac describes an original piano composition titled “Procession of the Iroquois Chieftain” which—though left un-scored, “‘cause I dont know how”—he claims to have recorded on tape. Charting his creative impulses, with increasing proficiency, from visual art to musical composition to narrative drama, he journeys to and from thematic fragments in a letter which was ultimately unsent to its intended recipient, Philip Whalen. The very fragmented nature of this letter, however, gestures towards his waning capabilities to produce the long, stream-of-consciousness prose which garnered him acclaim with his masterpiece On the Road.

Whalen, a California-based Zen Buddhist poet, appears to have maintained a stable relationship with Kerouac into the 1960s—relative at least to their fellow Beat-Generation authors named in the letter: Gary Snyder, Allen Ginsberg, Albert Saijo, Gregory Corso, Neal Cassady, Jonathan Williams, Ed Dorn, Robert Creeley and Lawrence Ferlinghetti. Contemplating the relationship between sentience and Buddhist enlightenment, Kerouac takes particular aim at Snyder, who “cant enlighten any sentient being because he is not sentient yet”. More amiable though equally scrutinising is his evaluation of Ginsberg: “Ginsberg is not a sentient being who delights in sentient being, tho he IS a sentient being, however he wished to be Satan, having missed that, now desires Immortality as a Guru.”

Such comments along with the scattered, colloquial character of the letter temper any genuine criticism of the authors, and possibly reflect a state of insecurity. In an earlier letter addressed to Whalen, Kerouac describes his feeling of loneliness: “I don’t even have a phone, or know where Allen is, or what Gary thinks of me, or Creel, or you for that matter” (Kerouac, 14 January 1963; in Letters, p. 355). Between enigmatic allusions to John F. Kennedy and the Library of Congress in the present letter, there lies a profound signal of Kerouac’s inner concern for his reputation among peers—with the recently published Visions of Gerard, mentioned in the first annotation, receiving poor notices—and reconciliation with his popular reception as a “King of the Beats” (Schmidt).

Among the chaotic literal and figurative scribbling, the letter’s inherent value as an exploration of Kerouac’s psyche is complemented by how it captures elements of his future literary output. A clear intent for his next foray into semi-autobiography is attested by the lines: “Now I am going to write a long dull novel about me and my father and my young days as handsome football player, merchant seaman, cunthound, butch make and leaf-of-grass-in-the-mouth aboriginal poet of Lowell and New York and the North Pole (where we went on 1942 ship in wartime).” Gesturing to a less fictionalised account, this paragraph captures the sentiments behind the work that would become Vanity of Duluoz. The at-times incoherent letter also, perhaps too realistically, presages Kerouac’s 1965 piece Satori in Paris, a “lamentably poor piece of writing,” in biographer Barry Miles’ words, which was “obviously written in an alcoholic haze.” (Miles, p. 337).

The present letter is marked by previous owner John Sampas as unsent, casting Kerouac’s aversion to time-consuming letter writing, which he details in the final paragraph, into new light. “I like you Phil,” Kerouac stipulates, “so I take a lot of energy to write you thse highly valuable notes, that you can save up your ass forever”. Thus the letter takes on a diary-like genre, allowing an isolated Kerouac to express a diverse array of otherwise pent-up thoughts on topics as diverse as the creative process, human sentience, spirituality, personal relations, celebrity and national acclaim.

Provenance: From the estate of Jack Kerouac. The letter was with Kerouac’s belongings upon his death in 1969 and ultimately passed to Kerouac’s brother-in-law John Sampas, who ended up with control of Kerouac’s literary works and over time sold many of them to collectors and institutions.

Transcription (spelling, abbreviations, punctuation and capitalisation have been retained; handwritten annotations are indicated in square brackets):

Present you with an oil painting worth 10,000 dollars within 5 years, that is, if I dont suddenly get bored with paint again, as I done in 1958, when I realized I didnt give a shit how it laid on or what it showed and who cared

Meanwhile my first piano sonata is an established fact, from the theme of the old Cornish tunes “God Rest Ye Merry Gentlemen” and suggested title given to me by Victor Gioscia the great modern Mystic Dago Philosopher: “Procession of the Iroquois Chieftain”– – –Not, mind you, scored down on paper, ‘cause I dont know how, but spontaneously on the piano played, in all movements, pizzicatto, allegro, etc., and recorded on good German tape recorder this masterpiece of nutty piano forte now available to anybody wants to hear it or publish it or record it. Really good at points and as Victor sez, Pure church music… “with an inexorable rhythm”– – – (slow, marching on, like Iroquois chieftains I guess).

But actually, I can paint, I can play weird piano, and of course I can write narrative dray-mas in poetic prose. What more do you want from me? Give me a drink, therefore!

Just thot today: Jack’s Zen is taking care of his Mother. Tell that please to Saijo. By the way, what’s his comment on the scene in Big Sur where he and I make faces at each other in the TB hospital garden? No word yet from him or you or Lew about specifics. Whatsamatter, all you guys turning like Rexroth into a critic too busy to read? I mean, okay, I wont read Updike until somebody tells me of a specific scene to dig. I dont particularly like the scene where you and I are in the park, but I do cherish the scene of me and Saijo at hospital which was mentioned by a beautiful redhead secretary of Robt.Giroux at lunch last week as best scene in book.

I remember Bill Burroughs used to hand me recent novels, in 1945 and 6, and say, dig the scene where Denton Welch meets a Chinese queer in an Alley, or dig the scene where Raymond Chandler talks to the old whore in an L.A. roominghouse, and that was the way he taught me: books arent always ALL good, but there can be choice scenes, like in Terry-Thomas movies, like, there are good scenes and lousy scenes.

I am appalled by the approving silence accorded to Big Sur.

Now I am going to write a long dull novel about me and my father and my young days as handsome football player, merchant seaman, cunthound, butch make and leaf-of-grass-in-the-mouth aboriginal poet of Lowell and New York and the North Pole (where we went on 1942 ship in wartime).

Now for yr. questions, dog:– Garry cant enlighten any sentient beings because he is not sentient yet. Why? To be a sentient being is to be a Holy Ghost. And Gary spits on that, like Gregory Corso spits on Bosatsu. Neither of them are sentient beings. A sentient being eats nourishment, digests it, shits it out, and says, “Wow, what a weird thing to be sentient,” period.

[blue ink: I’ll have you nailed to the Cross in September when publishers send you complimentary copy of VISIONS OF GÉRARD.]

Gary, I’ll fix him yet: he’s not even a sentient being yet, how can he be a Buddha? Neal is a sentient being and a Buddha also because he always says, “Come on, boy, time t’eat, make that coffee hot,dear.”

Which Neal is, and Jonathan Williams, and Hube Selbert (Cubby) Jr., and for that matter Edward Marshall. NOT Ed Dorn yet, or even Creeley, tho close. Ferlinghetti would be a sentient being if he knew it would amuse the audiences at Berkeley. Montgomery is a sentient being who thinks he’s crazy (dig?)

Yes, I got the FOOT magazine and I want you to write me a personal poem denying all that abstract horse shit.

Lew Welch always used to say there were 3 geniuses in one class at Reed: him, you, and Gary. This is a grand idea for an essay on America, for you or the other two geniuses.

“Belligerence! mixed bathing!”– – –“on purpose”– – – Let me tell you, bard, my only worry about money is the promise I made in my dying father’s house, to take care of his wife, his wife notmine, HIS wife, not MINE, to take care of her , for HIM, my father in Heaven, so the money part of my life is just that, because you know damn well if Memere was dead I’d have a shack in the mountains and you know that very well.

I didnt send Library of Congress to you, I dont know who did… maybe Allen did years ago, or Randall Jarrell, maybe, but anyway, they never came to me, so be honored. Or that is, dishonored, ‘cause why dont they come to me too. (O yes, Randall Jareell and Alleeen Ginsboig)…

However, John F. Kennedy made Salinger write me a note, which I dint answer any more than Faulkner, so there.

Lew Welch definitely loves me, not only in his own way, but in every way… I, like Lew now, dont want to waste my time writing letter… I have a 200,000 word prose-narrative-poem to write about my father, y’know, and howefer, I like you Phil, as you know, so I take a lot of energy to write you thse highly valuable notes, that you can save up your ass forever (and it being the ass hole of a 20 foot golden Taghatata oughta keep’)