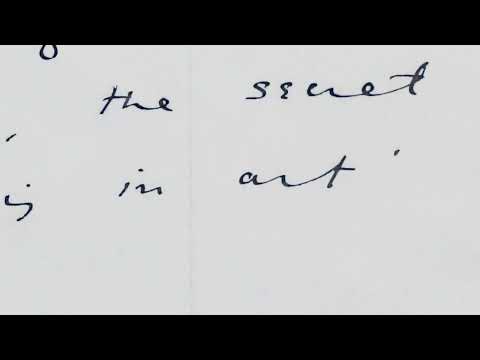 Oscar Wilde, one of the most vocal personas of the aesthetic movement, believed that life should imitate art not the other way around. As one of the most prolific and colorful intellectuals of his time, his belief in l'art pour l'art embodied the importance of the aesthetic for its own sake, emphasizing beauty rather than the moral or socio-political traditions of the Victorian era. Accordingly, among all of his acclaimed ideas, this autograph is quintessential Wilde. His life and his work were the personification of art for art’s sake, and redefined the role of the artist.

Wilde’s renown turned into international celebrity after being parodied in Gilbert and Sullivan’s comic opera Patience, which opened in New York in 1881. Patience producer Richard D'Oyly Carte sponsored Wilde’s North American lecture tour to offer new audiences “a chance to see and hear the leading exponent of aestheticism” (Ellmann, p.151). Wilde arrived in New York on January 2, 1882 and gave his first lecture, “The English Renaissance of Art”, on January 9th closing his remarks with his philosophical throughline, ‘We spend our days, each of us, looking for the secret of life. Well, the secret of life is in art.’ Wilde’s life was a work of art and his flawless dress and impeccable manner demonstrated that he had already discovered this secret.

He thrilled audiences as he lectured about art and life, painting a picture of America as a country full of art and beauty. Buoyed by the success of his early performances in New York, Wilde criss-crossed the continent in his ostentatious garb, mingling with American contemporaries Henry Wadsworth Longfellow, Henry James, and Walt Whitman, whom he greatly admired. His clever repartee and intellectual prowess drew standing-room only audiences, established him as the leading “professor of aesthetics" and created the first modern celebrity (Oscar Wilde, Oscar Wilde in America: The Interviews).

The 27 year-old Wilde gave a total of 140 lectures during this year-long tour, but the January 9th New York lecture is the only American speech whose text is documented. Strikingly, the present autograph differs from the published text of Wilde’s January 9th New York lecture. In print, the final line of Wilde’s lecture reads, “We spend our days looking for the secret of life. Well, the secret of life is art.” This autograph includes the additional phrase, “my friends.” This unique ad-lib gives us a true sense of his intent and presents the personal nature of his delivery more than any other record or report.

Wilde’s unconventional, creative and brilliant works provoked and entertained the audiences of his time, and are among the most quoted adages of the modern era. From the sardonic and wry (“I have nothing to declare except my genius”) to the owlish and abstruse (“Life is far too important a thing ever to talk seriously about it,” Lady Windermere’s Fan), Wilde’s epigrams live on as a genre of their own. This particular autograph encapsulates the idealist mission of Oscar Wilde to liberate art from its repressive tradition and to cultivate the modern idea that art need not express anything but itself.