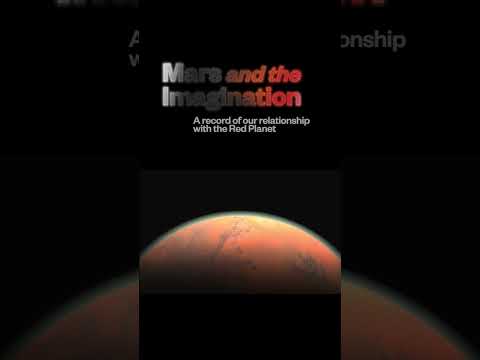 “For ages, to know Mars has been to know, or come to know, ourselves.”
– William Sheehan & Stephen James O’Meara

Mars and the Imagination: A monumental and carefully curated collection of over 900 works of both fiction and non-fiction tracing the history of our understanding and obsession with the Red Planet.

To begin exploring the collection, please see our description available on this page under "View the Collection".

Mars and the Imagination was conceived and assembled by the experienced collector David Wenner – whose comprehensive collection on the history of physics now resides at the Niels Bohr Library of the American Institute of Physics – and represents much more than a “collection” of works. Through his years of research and study, Wenner was able to unearth important and previously unrecognized literary and historical texts, making new connections among them. Contextualized in such a way, the items in Mars and the Imagination collectively tell an illuminating story through primary sources that to our knowledge has not been previously attempted. It is the story of our fascination with the Red Planet, a story of our wonder about something that is just out of reach, a story that has revealed as much about us as it has about Mars.

For hundreds of years, Mars has been observed by scientists, but lurked tantalizingly on the edge of our ability to truly understand the nature of the planet. It thus became a perfect template for speculation: What are the conditions on Mars? Is it hospitable to life? Are there, or have there ever been, living beings on Mars and if so, are they like us? Superior to us? Threatening to us? Will we ever be able to visit Mars?

The approaches to answering these questions have been varied, with both scientific inquiry and imaginative fiction in a continual dialogue of influence on each other. Mars and the Imagination, therefore includes texts by such scientific giants such as Kepler, Huygens, Hooke, and Cassini, but also fiction by literary masters such as Swift, Wells, Asimov, Bradbury, and Clarke.

Different Formats, Different Audiences: A Vision of Mars for All

The collection includes many specialist textbooks and journal articles written by scientists for fellow scientists, but it striking to witness how discussions of Mars seeped into the public consciousness of each generation. There are many papers from esteemed scientific journals such as Philosophical Transactions of the Royal Society, Comptes Rendus or Nature, but Mars is represented just as thoroughly in more popular publications such as The New Yorker, National Geographic, Life Magazine, and even Playboy.

It seemed, at times, that all society had a keen interest in news and speculation about Mars. The collection reflects this – seeing different formats and genres from the same period next to each other underscores the point that wonder about Mars has been part of the zeitgeist of each era, including our own.

One of the strengths of the collection is the preservation of essential primary source material that might otherwise be lost. Many of the items were published in ephemeral formats such as journals, magazines, or as pulp fiction. They were not designed to last and are extremely difficult to find in collectible condition today. Similarly, many of the more scholarly scientific works were published for a small audience of peers and never existed in large numbers. Mars and the Imagination provides a unique opportunity to see these primary sources in one place, and preserves them for future generations.

Most of the items in Mars and the Imagination are safely housed in beautiful custom boxes, with the contents often grouped together by themes and carefully labeled. Thus, the collection is attractively presented and easy to navigate, serving not only as a working library for study and enjoyment, but as an exhibit-ready collection.

For a more detailed exhibition of highlights form the collection, please click on the attached PDF.