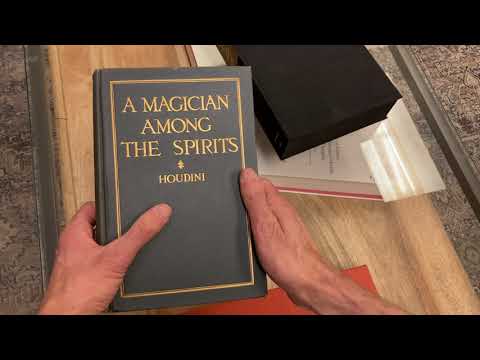 “Sir Arthur Conan Doyle has repeatedly told the Spiritualists that I will eventually see the light and embrace Spiritualism…But if Spiritualism is to be founded on the tricks of exposed mediums, feats of magic, resort to trickery, then I say unflinchingly I do not believe, and more, I will not believe. I have said many times that I am willing to believe, want to believe, will believe, if the Spiritualists can show any substantiated proof, but until they do I shall have to live on, believing from all the evidence shown me and from what I have experienced that Spiritualism has not been proven satisfactorily to the world at large and that none of the evidence offered has been able to stand up under the fierce rays of investigation.”
-Harry Houdini, A Magician Among the Spirits (1924)

“Houdini was one of the most remarkable men of whom we have any record, and he will live on in history…He had many outstanding qualities, and the world is the poorer for his loss.”
-Sir Arthur Conan Doyle, The Edge of the Unknown (1930)

Harry Houdini, the son of a rabbi and a doting mother, was born Erik Weisz in Budapest, Hungary in 1874. After moving to Wisconsin at age 4 then to New York City at 13, Erik Weisz eventually became the legendary Harry Houdini, a master mystifier now remembered for his sensational escapes but known in his time as an unmasker of frauds. When Houdini’s mother died in 1913 he lamented, “it was a shock from which I do not think recovery is possible.” Her death led to Harry’s interest in Spiritualism, a religious movement based on the belief that the dead could interact with the living, and he dedicated his book, A Magician Among the Spirits, to her.

Harry Houdini met Sir Arthur Conan Doyle in 1920 and they corresponded regularly about their mutual interest in Spiritualism. In 1922, while Houdini and his wife vacationed with the Doyle family, Houdini attended a séance with Lady Doyle, who claimed to be channeling Houdini’s mother. Houdini was hopeful that this religious movement would lead to contact with his dead mother, but he became skeptical of Lady Doyle and others who claimed to communicate with those on the other side. In early 1923, Houdini joined a committee sponsored by Scientific American which was offering $2,500 to any medium who could successfully demonstrate supernatural abilities. Houdini believed that his training as a magician gave him insights that scientists and academics lacked. After observing more than a hundred mediums, Houdini announced that spiritualists were charlatans and no prize was ever awarded. As President of the Society of American Magicians, he sought to uphold professional standards and expose fraudulent artists.

As his fame as a "ghostbuster" grew, Houdini chronicled his debunking exploits in A Magician Among the Spirits, which was published in May of 1924. In the dedication he refers to his mother as an “angel upon earth in human form.” The book also features a large photo of Houdini and Doyle opposite the title page as well as a chapter dedicated to the discussion of their friendship and divergent opinions about Spiritualism. As Houdini wrote, “Spiritualism has claimed among its followers numbers of brilliant minds—scientists, philosophers, professionals and authors…Such a one is Sir Arthur Conan Doyle…I have no warfare with Sir Arthur [but] so far I have never on any occasion…seen…anything which has convinced me that it is possible to communicate with those who have passed out of this life. Therefore I do not agree with Sir Arthur.” Doyle refused to believe any of Houdini's exposés and viewed him as a dangerous enemy. Doyle believed that the ungrateful and stubborn Houdini had insulted his wife’s powers, while Houdini believed that the Doyles made a mockery of his deep feelings for his mother, the ruling passion of his life.

A Magician Among the Spirits, like a good magician revealing a secret, invites us behind the scenes, educates us, and then allows us to find mystery in the countless questions that may develop. Houdini explains how mediums utilized props as well as the power of suggestion to convince people that the dead are among them. He does not ridicule Spiritualism but rather treats it with respect and sympathetically explains that it gained popularity after the unprecedented loss of life from World War I and the influenza pandemic. Houdini writes earnestly from the perspective of a professional magician, and, as he tells us in the Introduction, approaches his research scientifically, systematically, and with an open mind.

This copy of A Magician Among the Spirits was inscribed by Houdini to Frederick H. Young on September 19, 1924 at 1:30AM, perhaps following a séance. Houdini also signed the dedication page. He inscribed this book after spending much of the summer exposing the trickery of the celebrated medium, Mina "Margery" Crandon, the wife of a wealthy surgeon. In July and August of 1924, Houdini and the Scientific American committee attended five séances with "Margery" at various locations in Boston. Ultimately Houdini deemed her a fake and published a 40-page pamphlet, Houdini Exposes the tricks used by the Boston Medium “Margery.” As he told an interviewer from The Los Angeles Times, "It takes a flimflammer to catch a flimflammer." (“Margery Pamphlet”). In 1925 Houdini’s one-man show on Broadway included as its final act “Do the Dead Come Back?” in which he named and shamed mediums whom he believed were fraudulent. In February and May of 1926, Houdini testified before Senate and House subcommittees for a bill aimed at prosecuting anyone "pretending to tell fortunes for reward or compensation." According to one of his biographers, “This [anti-Spiritualist crusade work] is what Houdini wanted to be remembered for. He did not want to go down in history as a magician or an escape artist.” (David Jaher, The Witch of Lime Street)

Despite their distrust of Spiritualism, Houdini and his wife Bess agreed to conduct an experiment: the first to die was to try to communicate with the survivor. While still in his prime, Houdini died on October 31, 1926, at the age of 52, from complications of appendicitis. Houdini’s funeral was held on November 4, 1926 in New York City with over two thousand mourners in attendance. He was buried in Queens, in a coffin he'd made for one of his magic tricks, with his head lying on a stack of letters from his mother, instructions which he left behind in his will. Bess held a séance in an effort to contact her husband every Halloween for the next 10 years. In 1936, after 10 unsuccessful séances, she extinguished the candle that had been burning beside a photo of Houdini since his death and later said “ten years is long enough to wait for any man.”

A Magician Among the Spirits was the final book that Houdini published and the culmination of over 30 years studying occult phenomena. It’s a fascinating account of superstition and gullibility by the greatest magician of all time. Very early in his career Houdini identified with Spiritualism and hoped he could connect to his mother, but in publishing this work he concluded that “everything that I have investigated has been the result of deluded brains.” He was unrelenting in his criticism of Spiritualism and with this seminal work Houdini debunked what he considered to be one of the most fraudulent movements of the 21st century.

Illustrated with 20 full-page photographic plates (some with multiple images per plate). New York and London: Harper & Brothers, 1924. Octavo, original cloth with gilt title and gilt ruling on front board. As usual, without the rare dust jacket. Custom cloth box. Spine with mild fading and a little wear at edges. A handsome, well-preserved copy, with an intriguing inscription.

Harry Houdini. A Magician Among the Spirits. New York: Harper and Brothers, 1924.