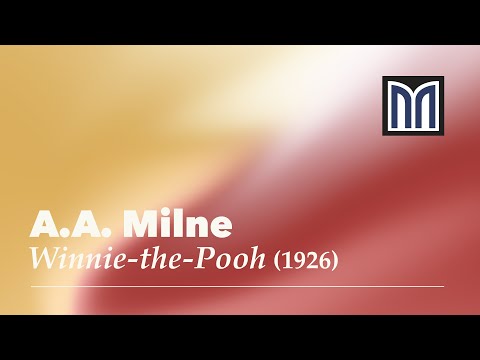 "When you wake up in the morning, Pooh," said Piglet at last, "what's the first thing you say to yourself?"
"What's for breakfast?" said Pooh. "What do you say, Piglet?"
"I say, I wonder what's going to happen exciting today?" said Piglet.
Pooh nodded thoughtfully.
"It's the same thing," he said.

In 1926, Milne "wrote Winnie-the-Pooh, a collection of stories he had developed about Christopher Robin and his beloved stuffed friends. The stories begin with Christopher Robin's pleas to the author to tell Winnie-the-Pooh stories about himself 'because he's that sort of Bear' and conclude when Christopher Robin goes to take his bath, promising to ask for more stories the following day. In between, the author spins tales of the animals' adventures in the forest where they and Christopher Robin ostensibly live… Each animal character is developed carefully and shown to be a little flawed--Pooh is a glutton, Piglet is timid, Eeyore is gloomy Owl is pompous. These characterizations allow Christopher Robin to play the 'adult' role in this world, stepping in to calm fears and solve problems, while remaining enough of a child to suggest games and enjoy parties. The same calm assurance found in Milne's poems that nothing really bad happens in the outdoors permeates the book, in which storms may come and bees occasionally sting, but everything ultimately works out for the best."

Winnie-the-Pooh, one of the world's most celebrated children's books, "has been translated into many languages, including Latin" (Encyclopedia of Children's Literature).

MILNE, A.A. Winnie-the-Pooh. London: Methuen & Co., Ltd., 1926. Octavo, original cloth gilt, original dust jacket; custom presentation box. Usual toning at gutter of endpaper maps but otherwise book fine, with cloth gilt exceptionally bright. Original dust jacket in outstanding condition, bright and fresh, with only a faint band of toning (about a half inch) along the top of the jacket and a tiny bit of wear at the top of the spine. A magnificent copy; rare in such good condition.